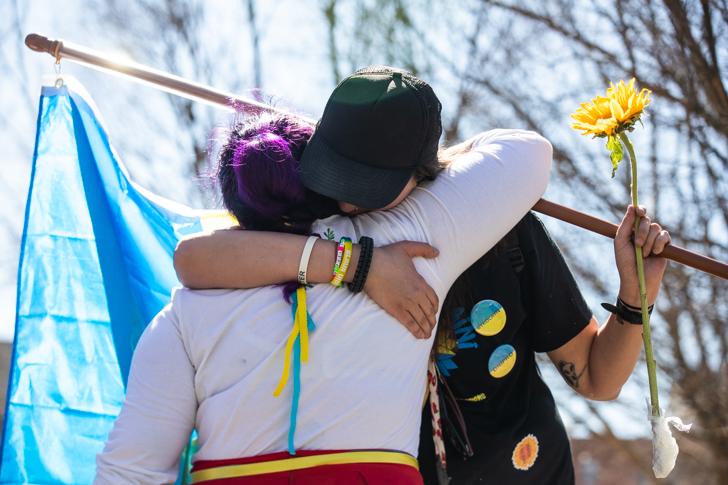 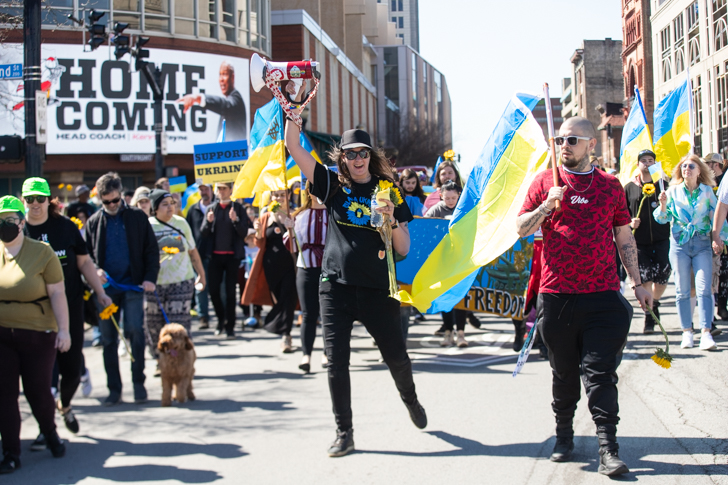 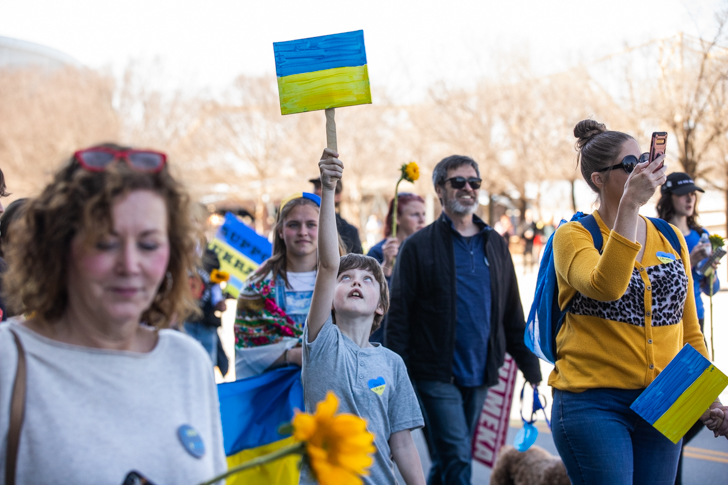 Yesterday afternoon, hundreds of people took to the streets of downtown Louisville in support of Ukraine’s fight against Russian attack.

The group of people, some of whom were (or were the descendents of) Ukrainian refugees living in Louisville, gathered at Waterfront Park on Sunday for an event that sought to raise both awareness of the situation in Ukraine and funds for the soldiers and families living and fighting in a war zone. In solidarity with the cause, many of the protestors wore blue and gold, the colors of the Ukrainian flag.

One common refrain, heard from the streets, seen on signs and T-shirts and chalk art, was the rallying cry “Slava Ukraini!” — “Glory to Ukraine!” — and its response, “Ukraini Slava!”

The rally had three parts: first, there was a community gathering, in which activists sold sunflowers, macrame flags, and other merch to raise money for the Ukrainian cause. Some children drew chalk art of Ukrainian symbols,  including the sunflower and the national flag, and wrote slogans like “Slava Ukraini” both in English and Cyrillic letters. The event was specifically billed as family-friendly; a group called the Kalashnikov Clowns (two of whose members have personal ties to Ukraine) provided face-painting and balloon art.

Next, a number of speakers testified about the traumas of fleeing violence in Ukraine and having family members and friends who are currently living through it.

Olga Savina, who organized the event, grew up in Dnipropetrovsk (more commonly known as Dnipro). She told the audience that she was fortunate not to be living under the Russian violence in her homeland, but she would happily go back and fight for her countrymen if she could.

She also thanked mayoral candidate Shameka Parrish-Wright, who, in her own speech, attested to the power of building community and solidarity among marginalized groups.

Tatyana Malkin, a teacher whose students showed up to the rally to support her, told the crowd that when she grew up in Kharkiv, she wasn’t allowed to tell people that she was Jewish for fear of anti-Semitic reprisals. She said that Russia’s violence against her home country is “against humanity.” Still, she said, “Just to go from being afraid of saying ‘Jewish’ to having a Jewish president in 30 years is amazing.”

Marianna Grabova, who wore a traditional Ukrainian outfit and carried a large Ukrainian flag, came to the rally with her brother and her Ukrainian immigrant parents, who all sold “SUPPORT UKRAINE” yard signs for $9 each to support the cause. Grabova urged the audience to stay informed and share the news about what was happening on the ground in Ukraine.

“Be strong, be angry, be loud. Tell people across the world of the horrors committed against the Ukrainian people. Educate yourself, post on social media, tell your family and friends, and educate others. Let people know that Putin is the new Hitler and that he is killing so many people, and this is a genocide.”

After the speakers, there was a short break, then the march began. LEO followed it through nearly a dozen blocks in downtown Louisville.

At the head of the march was a black car, driven by Sam Dore. On its back window were letters that read “SLAVA UKRAINI”; on its side windows, “REDNECKS FOR BLACK LIVES” and “BE ANTI-RACIST OR BE QUIET”; and on its front hood, “KEEP GØING.”

As the march progressed, Savina led the group with call-and-response chants: among them, “One, two, three, four, stop Putin, stop the war!” and “Not a penny, not a dime, we won’t pay for Putin’s crime!”

When the march concluded, Savina thanked the group for coming and said she appreciated the love she felt from the group.

You can donate to Savina’s organization, Slava Ukraini International, on Venmo (@Slava-Ukraini-international) or CashApp ($SlavaUkrainiInt.) Funds will go toward aid in Ukraine. 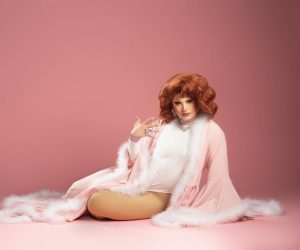