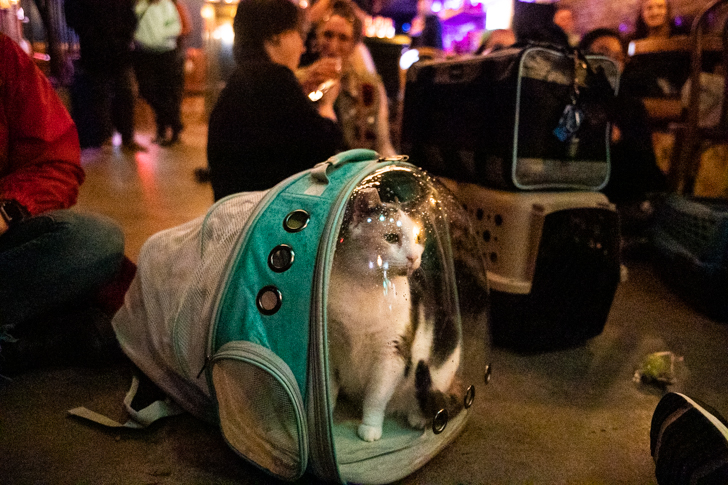 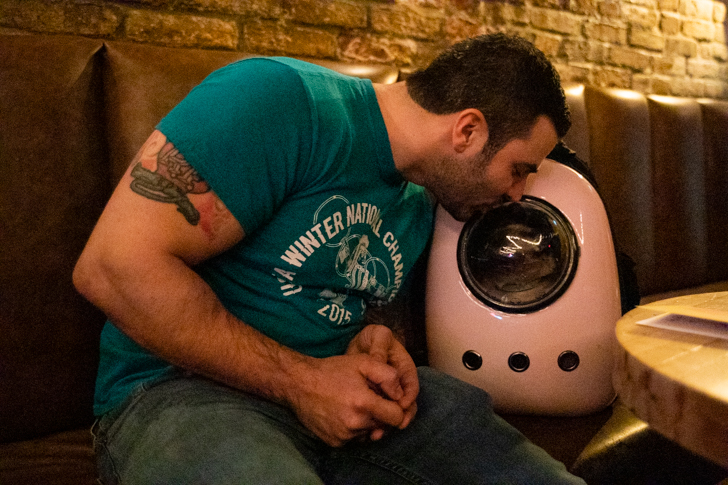 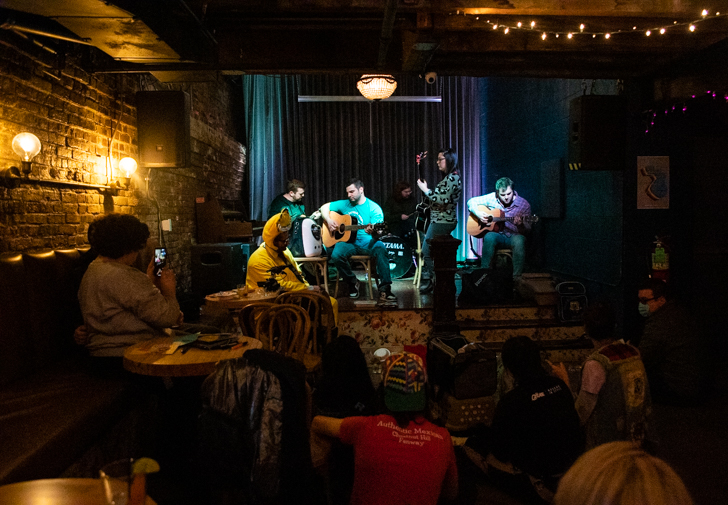 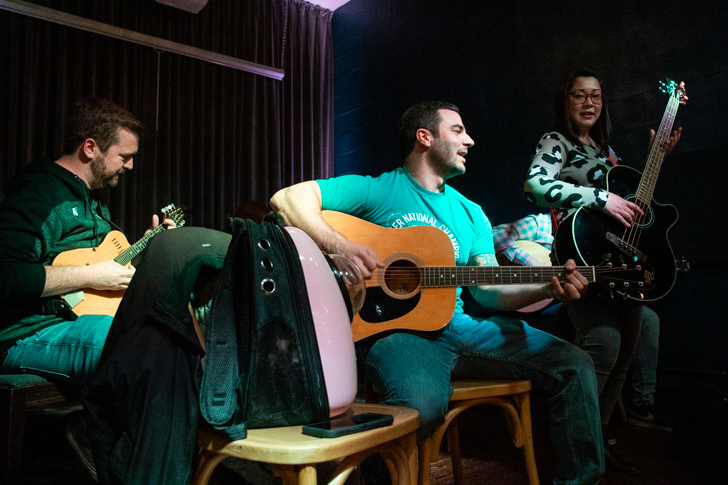 Last night at The Flamingo Lounge, local thrash metal band Belushi Speed Ball played a 20-minute acoustic set for, to, and because of cats.

The band, whose members normally wear costumes, trash  venues, and/or stage-dive at their shows, did nothing of the sort. Instead, they played cat-themed versions of their songs to a small audience of cats (and their owners).

Ironically, one of the most atypical Belushi concerts — if there is such a thing — ended up being the most Belushi-esque.

Frontman Vinny Castellano has a cat, a two-year-old Siamese named Stella — technically Stella 2, although her full name is Estelle Getty Castellano II, named after the “Golden Girls” actress — and he loves her very much. On the band’s social media, Castellano posts every so often about taking her out into the community — to Walmart, for example, or to see the new Spiderman movie — inside her astronaut-suit-looking cat carrier. The band released a double EP named after her and Castellano’s former cat “Stella 1” last year.

Last night, Stella took the place of honor onstage inside her carrier.

All told, there were five cats at the show: Stella, Ginny, Guthrie, Tom and Wilbur — and one small dog named Love Puppy. (A few band members said that the turnout was several more cats than they were expecting.)

All of the animals, surprisingly, were calm and quiet during the performance. Castellano told LEO that Siamese cats like Stella are normally very vocal if they’re upset, but she  stayed quiet and wide-eyed as the band played.

There was also another cat in the audience — sort of. Señor Diablo (Beau Kaelin), the band’s manager, wore a Garfield costume, which Castellano and bassist Jazzy Romans told LEO was a surprise to them. Diablo ate lasagna, distributed goodie bags of treats and toys, and “interviewed” the cats in between songs as part of a video of the show that will go on his YouTube channel.

(Lest that seem too insufficiently catlike of him, though, fear not: Diablo also pretended to vomit up a hairball, and he later lay down and mimed being a cat wanting belly rubs.)

Nine-year-old Ginny was the first (real) cat besides Stella to arrive, so Diablo interviewed her first.

Ginny, like all the other cats, evidently declined to answer Diablo’s questions. After the show, when pressed for comment (gently, behind her ears), she only nuzzled this reporter’s hand in reply.

When Diablo later interviewed the cat named Tom and asked him his favorite Belushi Speed Ball song, Tom’s reply was, according to Diablo, “whatever was next in the setlist.”

The band changed most of their lyrics and song titles last night to be cat-themed. In the song “Hash Slinging Slasher,” the lyric “In the name of all things metal” became “In the name of meow, meow, meow, meow.” “Glass Bones and Paper Skin” became “Glass Cats and… Cats.” The song “Vegeta is a Good Dad” became a song about Jon Arbuckle being a good owner to Garfield. Castellano said that if he forgets his lyrics during a normal show, he just screams, and last night’s equivalent was just saying “meow” instead.

The concert originally came about in part because a fan named Madge Slaughter messaged the band on Facebook last December to say that she’d had a dream about bringing her cat to a Belushi show.

Castellano said he’d make it happen, and he did.

Still, he joked last night that the audience should all buy beers from their friend and promoter Kin (McKinley Moore) because the concert was “the dumbest thing he’s ever let us do.”

CORRECTION: An earlier version of this story gave the wrong name for Love Puppy, the dog in attendance at Belushi Speed Ball's show. 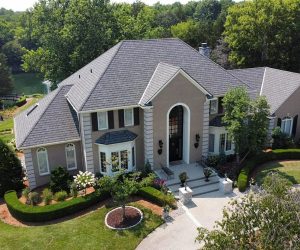 PHOTOS: This Manor Has A Lake With Two Waterfalls In The Backyard 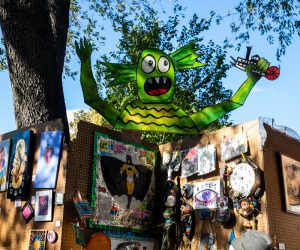 PHOTOS: Everything We Saw At The UnFair Art Show 2022 [NSFW] 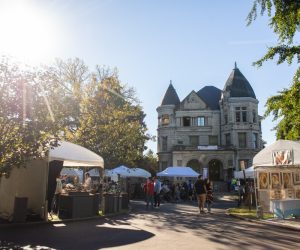 PHOTOS: Everything We Saw At The St. James Court Art Show 2022 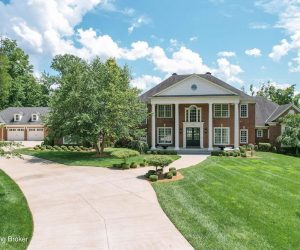 PHOTOS: This Glenview Estate Has A Tunnel Connecting The Home To The Pool House

PHOTOS: This Manor Has A Lake With Two Waterfalls In The Backyard

PHOTOS: Everything We Saw At The UnFair Art Show 2022 [NSFW]

PHOTOS: Everything We Saw At The St. James Court Art Show 2022

PHOTOS: This Glenview Estate Has A Tunnel Connecting The Home To The Pool House

PHOTOS: Everything We Saw At Louder Than Life 2022

PHOTOS: Everything We Saw At NuLu Fest 2022