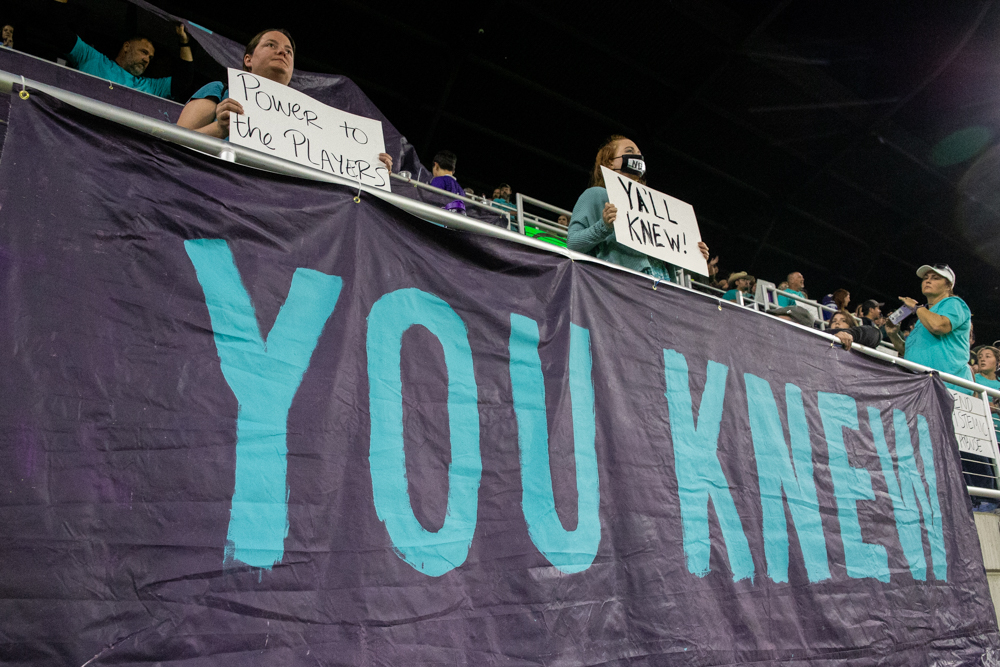 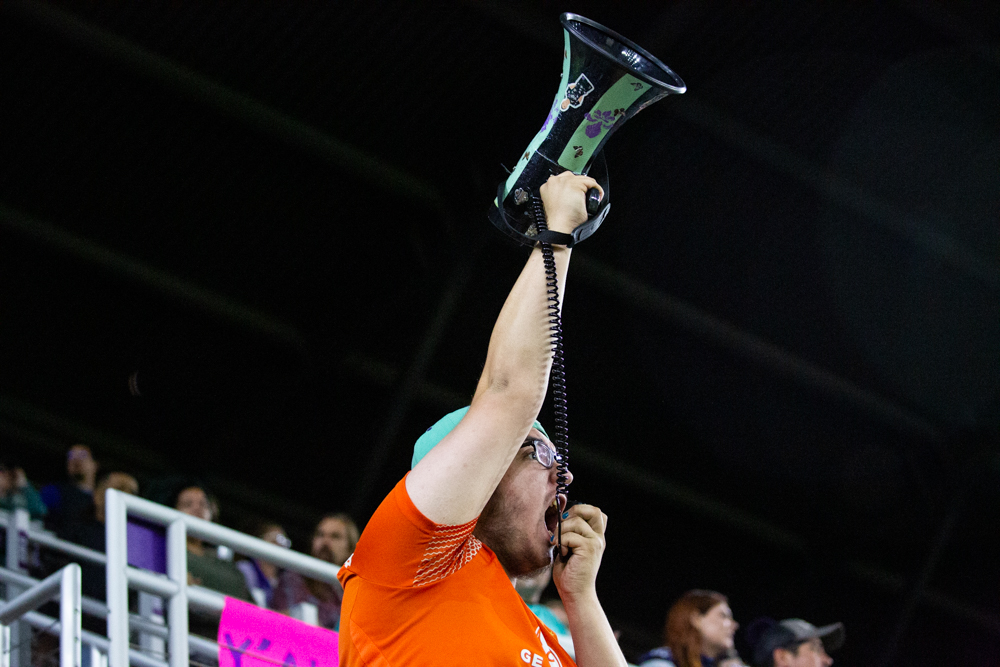 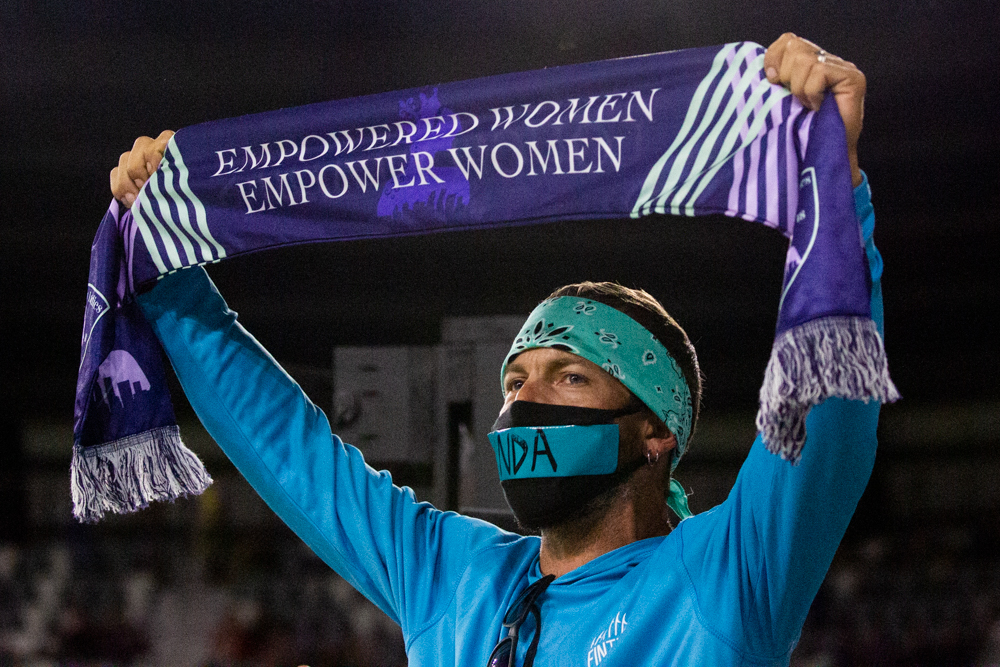 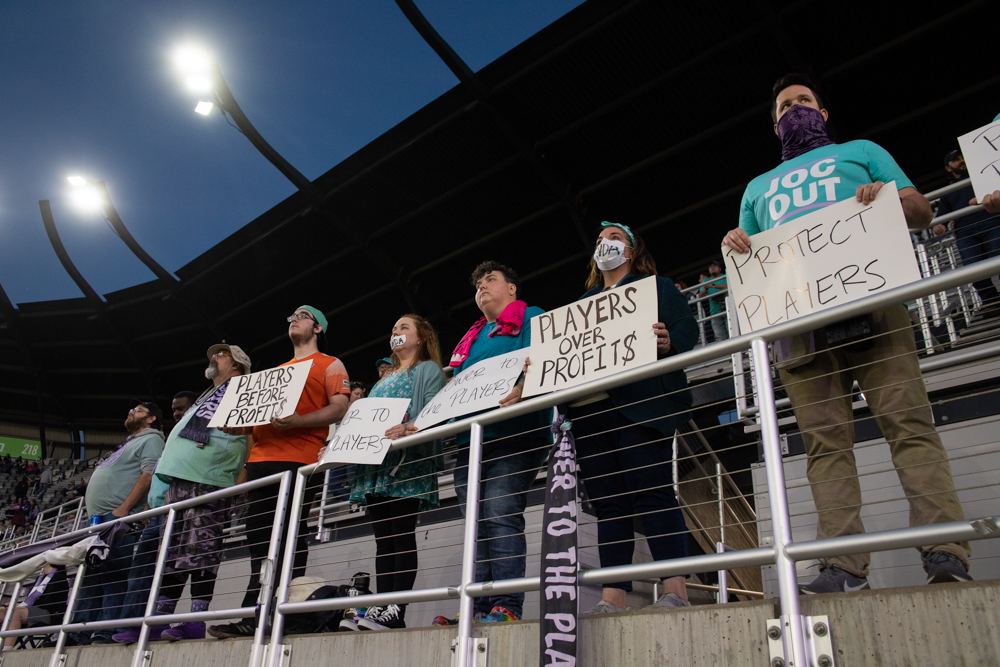 When LouCity took on Detroit City FC last night, some fans, particularly those in the supporters groups The Louisville Coopers and the Lavender Legion, protested by staying silent — no chants, no cheers, and no drumming. None of the capos (fans who lead chants and cheers) took to their usual podium, which was decorated instead with scarves that read "POWER TO THE PLAYERS," plus a teal cloth. Many fans also wore teal, a color that represents support for sexual assault survivors.

Even in moments of LouCity success, like when defender Wilson Harris scored a goal in the 61st minute, some fans continued their silence and held up signs with slogans like "END SYSTEMIC ABUSE," "PROTECT PLAYERS," "PLAYERS OVER PROFIT$," and "JOC OUT,” a reference to James O’Connor, the president of Racing Louisville and LouCity.

O’Connor, who was the executive vice president of Racing Louisville when Holly was fired last August, has faced anger from fans who say he downplayed and covered up alleged sexual misconduct by Holly. Last year, when O’Connor was asked if what Holly was fired for was illegal, O’Connor said: “I don’t know whether I’d say illegal. I don’t know, that’s a subjective viewpoint if you like, depending on who’s asking and different people. I’ll plead the Fifth. I’ll take the attorney line on that.”

According to an investigation by former U.S. Deputy Attorney General Sally Yates that was commissioned by the United States Soccer Federation, Holly is accused of sexually assaulting former Racing Louisville player Erin Simon.

Last night, some fans covered their mouths or masks with masking tape emblazoned with the letters “NDA,” a reference to non-disclosure agreements. According to the bombshell report outlining abuses in women’s soccer, Racing Louisville cited non-disclosure agreements in their refusal to cooperate with the investigation into Holly’s alleged actions.

At the start of the second half of last night’s match, Braeden Downey, a board member on The Louisville Coopers and a member of the Lavender Legion, unleashed a full-throated cry into a megaphone: “We demand immediate action!" He also started a chant: “J-O-C out!" Fans in a standing-room-only supporter section released large hanging banners that read "YOU KNEW" and "J.O.C. OUT."

Behind them, other fans unfurled an even larger tifo (banner), which read: "ARREST HOLLY.”

Although LouCity normally holds on-field press conferences with players and Coach Danny Cruz after games, there was no press conference after LouCity’s 2-1 win. A recap email sent from LouCity's communications office later did not mention the protests.

In a statement ahead of the game on Wednesday, O’Connor said that hiring Holly was a “mistake” and apologized to Simon, players, and Racing Louisville fans. Despite calls from fans, the statement did not mention the possibility of O’Connor stepping down. After he issued his statement, O'Connor was in attendance at the LouCity game.

In a statement about the "ARREST HOLLY" banner, the Louisville Coopers said:

"Over 70% of sexual assaults go unreported. Survivors have many valid reasons not to report, among them the concern that they will not be believed. We want all survivors, including the survivors of Christy Holly, to know that we believe them. It should not have taken an exhaustive investigation for the truth to come to light, but here we are. If any survivors of Holly decide to press charges, we support them. People in power who failed to shine a light and allowed him to leave in a manner that freed him to continue to abuse people should be fired immediately."

Check out our gallery above to see how fans protested.

Keep Louisville interesting and support LEO Weekly by subscribing to our newsletter here. In return, you’ll receive news with an edge and the latest on where to eat, drink and hang out in Derby City.